The Greater Trail area consists of five communities – Trail, Montrose, Fruitvale, Warfield and Rossland, and two Regional Districts – Kootenay Boundary Electoral Areas “A” and “B”. Each has its own unique ‘personality’, history, micro-climate and demographics. The communities share common traits such as their friendly, safe and relaxed atmosphere.

The City of Trail is situated on the banks of beautiful and mighty Columbia River. Trail is commercial, financial, and industrial centre for the South Kootenay region.

This city had its beginning during the mining boom around the end of last century. In 1896 Trail, British Columbia was the 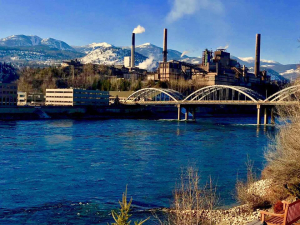 home of the first smelter, which, in a much changed and more sophisticated format, still dominates the skyline and the local economy. Trail is also known for its significant Italian community. Before the end of World War II Italian immigrants were largely responsible for shaping the community’s social and cultural structure. 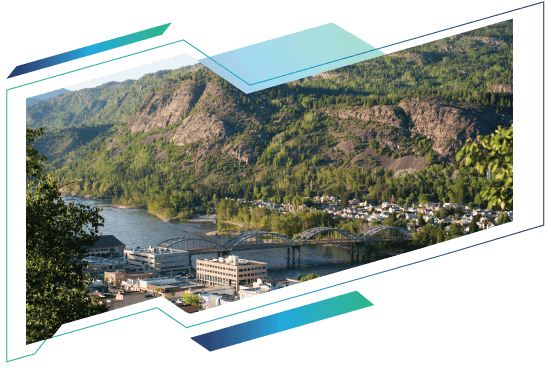 A History of Discovery
Visiting or Moving to our Area

The Greater Trail area is nestled in the Columbia River Valley of southeastern British Columbia, 19 km north of the U.S. border. The closest major city is Kelowna at 309 km to the west. Vancouver is 625 km to the west and Calgary is 656 km to the east. Spokane, Trail’s U.S. neighbour to the south, is 220 km.

The City of Trail

The City of Trail is situated on the banks of beautiful and mighty Columbia River. Trail is commercial, financial, and industrial centre for the South Kootenay region. This city had its beginning during the mining boom around the end of last century. In 1896 Trail, British Columbia was the home of the first smelter, which, in a much changed and more sophisticated format, still dominates the skyline and the local economy. Trail is also known for its significant Italian community. Before the end of World War II Italian immigrants were largely responsible for shaping the community’s social and cultural structure. 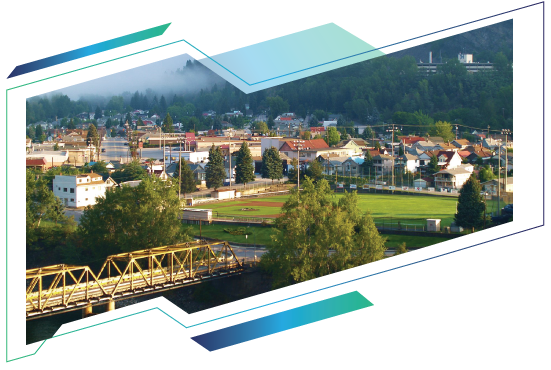 The City of Trail is situated on the banks of beautiful and mighty Columbia River. Trail is commercial, financial, and industrial centre for the South Kootenay region. This city had its beginning during the mining boom around the end of last century. In 1896 Trail, British Columbia was the home of the first smelter, which, in a much changed and more sophisticated format, still dominates the skyline and the local economy. Trail is also known for its significant Italian community. Before the end of World War II Italian immigrants were largely responsible for shaping the community’s social and cultural structure.

View of the City and Cominco Smelter 1961 Cominco Ltd.’s Trail Operations continues to be the economic cornerstone of the Greater Trail area. Recent modernization of the Trail Operations has promised to extend Cominco Ltd.’s presence in Trail well into the 21st Century. The City of Trail continues to prosper in this strong, economic climate and to provide its citizens with first-rate services and quality of life.

By 1941 the City had expanded into the East Trail residential area as the population grew as Cominco prospered during World War II.

West Trail Area and the Gulch

On Rossland Avenue you will find the neighbourhood known as “the Gulch.” Originally called “Dublin Gulch”, it lost the “Dublin” as it filled up with Italians who came to Trail to work at Cominco. Many of them chose not to live on the original Trail townsite and built their homes on the banks of the mountainside. The Gulch consists of four or five hundred metres of houses and apartment blocks, and the best Italian grocery store in Trail – the Star Grocery – and other shops, Rossland Avenue rolls down the length of the Gulch on its way to Trail’s city centre with Saint Anthony of Padua, on the left at the top of the Gulch. On the right, there are a number of well known establishments and clubs – The Rex Hotel, Columbo Lodge Italio Canadese Hall, Trail Hotel and the new Casa Lingo Italiana Restaurant (now in the old Nellie’s Pizza building).

At the bottom of the Gulch, Rossland Avenue is the Best Western Terra Nova just down from highway 22 which leads left up the 8% grade along the side of Smelter Hill on its way to Castlegar 26 kilometres away. By heading down eastward you reach Victoria Avenue, defining the northern bounds of Trail’s central business district.

The sub-division of Sunningdale is reached via Charles Lake Drive from East Trail. In the late 1940’s after World War II, houses were built and financed by Central Mortgage and Housing Corporation to provide affordable housing for returning war veterans. Sunningdale consists of a lower bench and an upper bench. The upper bench mainly consists of houses that were built for war verterans, while many houses along Hazlewood Drive with river view lots were built and owned by doctors and professionals.

The Beaver Valley is a gentle and narrow valley east of Trail lined with evergreens and traversed by Beaver Creek, famous for its plentiful brook and rainbow trout. About 5,000 people make their home in the Beaver Valley which also contains the Villages of Montrose, www.village.montrose.bc.ca and Fruitvale www.village.fruitvale.bc.ca .

The Village of Montrose

The Village of Montrose was founded in 1942 on a flat acreage above the Columbia River and is home to about 1200 residents today. Named after a popular community in Scotland, Montrose is known for its unique vantage of the Columbia River Valley. In about 1942 Leon Simmons had an idea of developing Woods Flats, and area of about 220 acres situated above the Columbia River east of Trail. This area was primarily owned by CM&S Co. (now Teck Cominco). Together with Trail lawyer A.G. Cameron, the formed Montrose Homesites Ltd. The land was surveyed into lots and shortly thereafter the Montrose Improvement Association was formed. The MIA provided guidance, fire protection, and entertainment for the residents. Montrose became and incorporated village on June 22, 1956 with a population of 707 citizens housed in 250 residences. The Montrose Improvement Association developed into a council with a chairman and four commissioners. The Montrose Recreation Commission was formed soon after and continues today as an integral part of the Village’s structure.

The Village of Fruitvale

The Village of Fruitvale is located east of the City of Trail on Highway #3B within the eastern section of the Regional District of Kootenay Boundary. Lush vegetation and farmland, open spaces, horses, babbling creeks, barnyard animals and a warm country town characterize Fruitvale. Situated 20 minutes east of Trail and with an elevation of 500m (1,625 ft), Fruitvale is an ideal location for serious or hobby farming or just living the country life without foregoing the convenience of city amenities. Fruitvale was originally named Beaver Siding because it was a railway stop for the Great Northern Railroad.

In 1906, Fruitvale Limited purchased a great deal of land on both sides of this stop and changed the name to Fruitvale. This named played an important part in the company’s propaganda scheme that depicted Fruitvale as the best fruit growing area in the West Kootenays. Fruitvale was incorporated as a village on November 4, 1952. Today, Fruitvale is mainly a residential area for the employees working in industries located in and around the area. Fruitvale is rural living at its best.

Rossland is your entrance to the Kootenay Gateway. Our location, simply put, is as a mecca for outdoor enthusiasts and naturalists alike. With seemingly endless terrain and an urban”ish”-mountain culture, you will soon see why tourists turn into residents who then make Rossland their home-base for life. Explore at your own pace. Forget “doing it all” because there’s a LOT to do. Actually, forget doing anything if you prefer peace and quiet to adrenaline surges. Ride a horse. 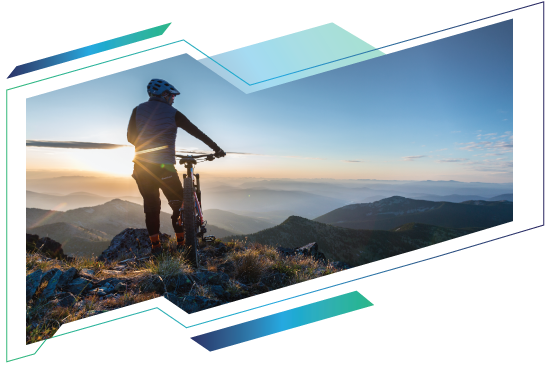 Ride a bike. Ride a golf cart. Ride a bar stool. We won’t judge. Just get up here and stay long enough to let all that special seep in. Don’t spin your wheels! Be sure to stop by the Rossland Museum Visitor Centre and Kootenay Gateway Offices to catch-up with a local on where the party’s at, what trails are wicked that day and for directions or accommodation suggestions to fulfil your adventure.

Rossland is located in the beautiful Kootenay Rockies Region of British Columbia, and is home of Red Mountain Resort , one of the biggest ski resorts in western Canada. Located on the Powder Highway, in the Kootenay Rockies, Rossland offers both summer and winter charm. An unpretentious community which still offers a unique and authentic experience to all of our visitors.

The Village of Warfield

Siutated between the Silver City of Trail and the historic gold town of Rossland is Warfield, the Jewel of the Kootenays. Affectionately known as “Mickey Mouse town” because of the cartoon-like houses built there in the late 1930’s, Warfield is a tight-knit community with a population of 1700 where the volunteer spirit and sports participation is legendary. Warfield, which started in the 1930’s specifically as a community for smelter employees, was incorporated as a village in 1953. Warfield is 5 minutes down the mountain from Rossland, hence has a lighter winter snowfall, earlier spring and warmer climate. It backs onto a golf course, cross country and bike trails and is home to the newly refurbished outdoor pool and water park.

US Customs and Border Protection

Nelway / Metaline Falls:
Hours of operation: 8:oo am to midnight year round